Ryan in the news

Ryan was on the news! He helped out in a homeless clinic yesterday and was caught on camera. Don't blink, because you might miss him :)
Posted by Ellsworth at 6:34 AM 3 comments: 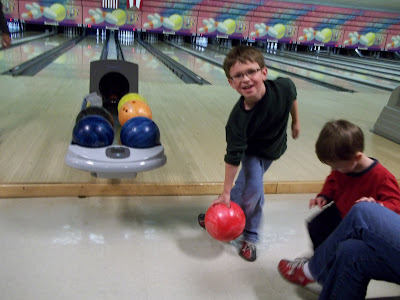 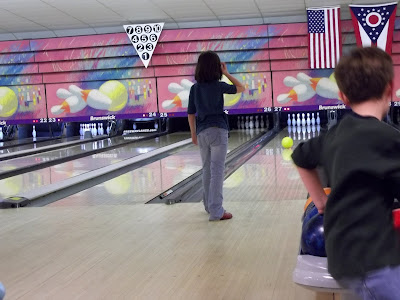 This month we were so lucky to have my parents visit for two weeks. We had a pretty low key visit, because I babysit full time from home. But we were able to get out a couple of times :)
One night we went bowling at the largest bowling alley in the U.S.A. They have 96 lanes and it is actually hard to get a lane to play on, on the weekend nights because they are full. But we got lucky to be able to play without a wait. It has been such a long time since we have been bowling that Eve had never gone before. It was so fun to see Lincoln get really excited and say "I throw the ball".
My birthday fell on Martin Luther King Jr. holiday this year so the kids had off school. If you live here in Cleveland, on this holiday every year all museums are free. We tried to go to the Rock and Roll Hall of Fame but the line to go in was out the door and to the curb. So, instead we headed to the Natural History Museum and the Case Western Historical Society. I wish I had taken some pictures but I totally forgot to.
I also forgot to take pictures of my parents during their visit here. We LOVED having them and can't wait until we can be together again.
Posted by Ellsworth at 6:59 AM No comments: 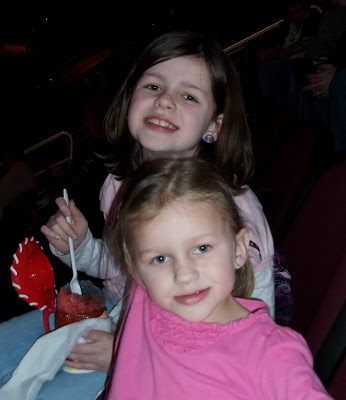 My Grandparents gave our family a check for Christmas to buy some gifts from them. Ryan and I decided to buy tickets to an event for each family member instead of more toys for the kids. This ended up being a huge hit and I think will become a tradition for us. The girls and I were able to go see Toy Story 3 on ice. It was so fun just to be out on a girls night with my girls. The boys are going to be going to see a monster truck jam in February.
When Barbie came on Eve said, "She is BEAUTIFUL!" 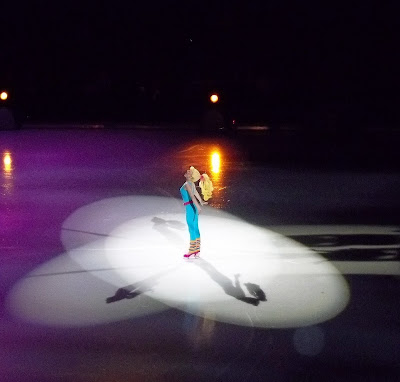 Then there was a ton of Barbies which was even cooler!

Posted by Ellsworth at 11:45 AM No comments: 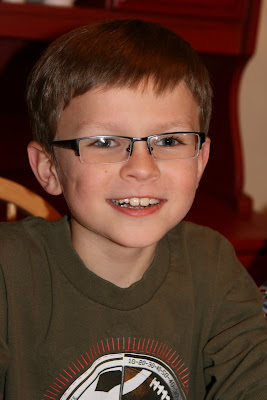 At the kids' school they did a vision test this year. Reuben was sent home with a letter that he might need glasses. So I made an appointment and sure enough he does need glasses. His prescription isn't super high but it definitely helps him. He also has a stigmatism in his right eye. We were able to get in on the buy one get one free at the glasses store. Here he is sporting his new look. The girls are a little envious, but being really good sports about it. I totally remember when I was younger and wished that I could get glasses and braces. I ended up needing both, and then they weren't as cool. Hopefully Reuben continues to love them because I think they are super cute! 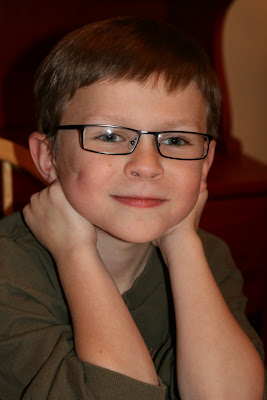 We were so blessed this Christmas to have Ryan home for two weeks! It just so happened that he was on his general surgery rotation and two weeks-off are automatically built into that rotation! We could have just stopped there because that was the best present EVER!
Kaitlyn was the first one to wake up this year. As soon as Lincoln woke up he said, "It's Christmas time!" These pictures show what "Christmas Time" was like at our house. 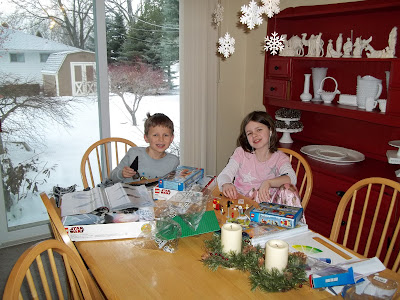 Christmas wouldn't be complete without Reuben putting together Lego sets. Kaitlyn is jamming out on her new ipod shuffle. Kaitlyn's reaction was priceless when she opened this gift! She was so excited/surprised to actually get a shuffle. We had told the kids that this christmas was going to be pretty small this year. But through many blessings we were able to provide a wonderful christmas for the kiddos. 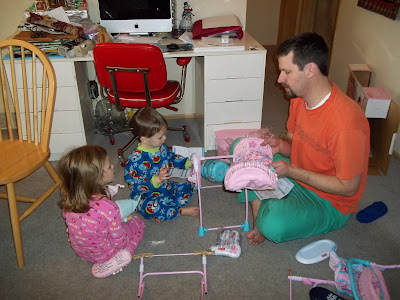 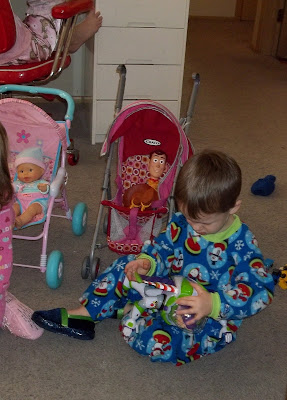 Lincoln played all day with Woody and Buzz. His monologue between the two was hilarious! He got us to laugh so hard we cried a couple of times. 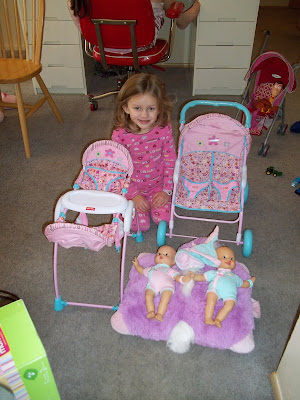 Eve is so proud of her babies and pillow pet 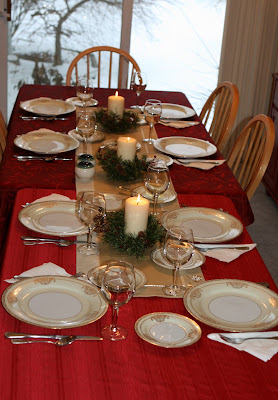 I was so excited for Christmas dinner when I got to use our china, which was handed down by my grandmother, for the first time. We are so thankful for the wonderful families which were able to celebrate Christmas with us.
Posted by Ellsworth at 6:02 PM 2 comments:

I (Ryan) remember a game we played, when I was young, with my Aunt Sherrie called "Feasty, Fousty, Flatty, Cutty, or Claw". She played the games with the kids at a family reunion about 5 years ago, which the kids just loved. 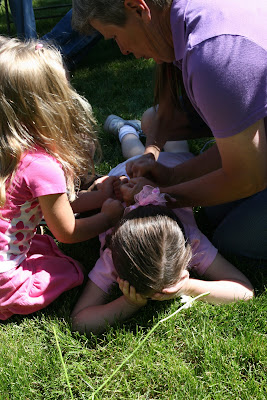 In this picture Kaitlyn is laying face down and Aunt Sherrie and my niece, Naomi, are around her playing the game.
The game is played by the person which is "it" lays face down on the floor with their eyes closed, the rest of the group sits around the person. They silently decided among themselves which of the choices they will use then chant "feasty, fousty, flatty, cutty, or claw". Their hands are made into feasty position (pinching), a fist (fousty), open hand with palm to the person (flatty), open hand in a chopping position (cutty), or a claw position (claw). The person laying down has to then guess which one of the choices they are demonstrating. If the person guesses incorrectly they then receive a treatment of the guesture (humanely) to the persons back. This continues until the person guesses correctly. Officially at the time they guess the correct one they quickly look behind them to see if anyone is left in that position. The last person left in that position is then subject to being the one that lays on the ground.
During my recent time off we thought it would be fun to try this game on the kids again. They had a great time and it was fun to remember old times. 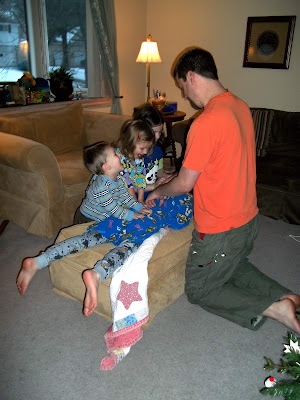 Here we have Reuben is laying down and he apparently chose wrongly as he is receiving the claw treatment.
Posted by Ellsworth at 11:36 AM 1 comment: