So, we haven't fallen off the face of the earth over here. Just keeping busy. Looking back I didn't really take any pictures of Christmas Eve and Christmas this year. It was a nice relaxing Christmas. Christmas Eve we spent just as our small little family. We had our traditional steak and potatoes dinner, with Dickens Pudding for dessert. I think Reuben was the only one, of the kids, that enjoyed the steak and no one except Ryan and I enjoyed the dessert, but hopefully the rest will learn to like it as the years go on. To me it isn't Christmas Eve without the food traditions. My mother is such a wonderful cook and all of us looked forward to her special holiday meal traditions. After dinner we had the kids open some pajama pants that I had sewn. Then the kids schemed and talked Ryan and I into letting them open their present from each other. (We put all of our names in a hat on Thanksgiving and draw out a name of someone else in the family, the kids love this.) Ryan and I decided it wouldn't be the end of the world if we gave in and that it was actually a good idea because this way the gift from the family member wouldn't get lost in the chaos of opening presents in the morning. It ended up being wonderful! We all played the game Reuben received and Lincoln could not stand to part with his squinkies from that moment on, the girls loved their hand picked presents too. After some cookies were put out for Santa it was off to bed. 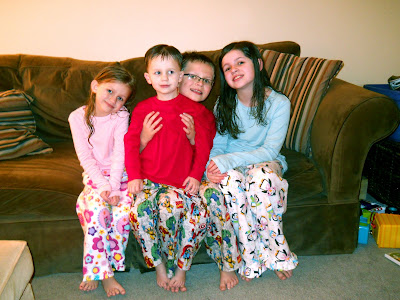 Lincoln saw me working on these pajamas and just had to have super hero pajama pants just like Reuben's, luckily I had enough to be able to make both of them. 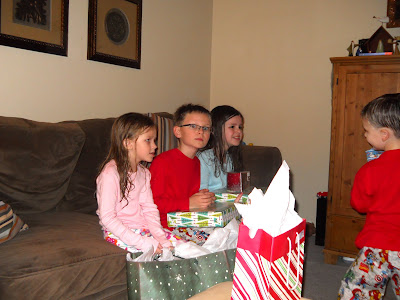 Here's the gang holding their presents that they purchased for each other in the family.
Christmas started with opening of presents and then going to church. It turned out to be a relaxing afternoon followed by dinner at our dear friend's house. 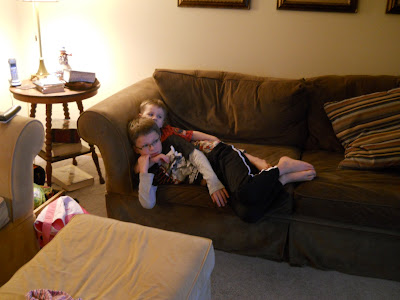 This has nothing to do with Christmas, but I just had to include this picture.
Most mornings are spent like this. The kids finish waking up in front of the t.v. More often than not Lincoln will snuggle up the Reuben or at least sit right next to him. They truly are such good friends or as Lincoln likes to say "best bubby". We have fantasized of someday owning our own home and having more bedrooms and space. The cute part is Reuben still always says he wants to share a room with Lincoln. Don't get me wrong they do have their moments when they would like to play without the other, but I know they really do love each other. As a mother moments like these just melt my heart.
Posted by Ellsworth at 7:53 PM 4 comments: