We love Halloween over here! It was a party all day long.

Lincoln's preschool started off the day with a party. I only got this one picture, but they played games and had some treats. Lincoln asked to take his costume off while he ate, but he wore his costume for the games. 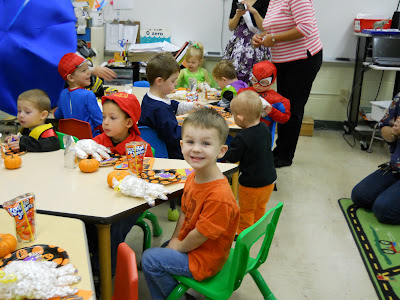 In the afternoon, the elementary had their annual Halloween Parade. It was so fun to see all the kids dressed up in their costumes. Following the parade Lincoln and I were lucky enough to get to help out with Eve's classroom party. I forgot to bring my camera for the festivities :(

After dinner we geared up to go trick or treating in our neighborhood. We were joined by 7 other families! It was our biggest group by far. We are missing one family in the photo, but you can see how large our group was. Our poor neighbors didn't know what they had coming. Can you tell Link isn't too happy in the photo? He was standing by Reuben and Ryan couldn't see him in the picture so he had him move to the front of the group. Lincoln wasn't a fan of that idea. He sure loves his brother! It melts my heart! I ended up staying at home to pass out candy and be a home base for those who wanted to come back because they were cold.

And they are off! 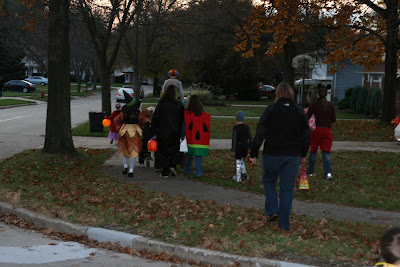