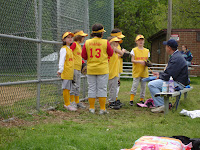 Kaitlyn has started up softball this year.  Her first game was a week ago.  She loves it!  She has a couple of friends from school on her team which makes it even more fun!
I missed her first game because my quilt guild was meeting that night as well.  Ryan and Evie took this photo below as they were watching Kaitlyn play.  Aren't they cute?!! 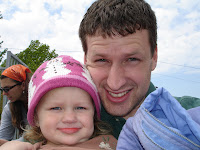 When I came home it looked like Ryan and the kids weren't home yet.  Then my neighbor stepped out of the house into the garage and told me that Ryan had taken Kaitlyn to the ER.  I guess the ball hit Kaitlyn's finger when she was up to bat.  The amazing thing was she ran each of the bases through three girls batting.  It wasn't till she finished running the bases and rejoined her team that she broke down from the pain.  It was pretty black and blue at that time so Ryan took her in to be checked out.  I ended up meeting them at the hospital.(Thanks Jackie for watching Reuben and Evie!)  She hadn't broken her finger!  But they did make a hole in her fingernail to let the pressure out from underneath it.  She is doing great!  She is my brave little girl! 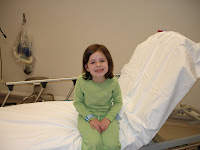 Posted by Ellsworth at 7:23 PM

Thats too bad about Kaitlyn's finger. Those kind of injuries hurt like crazy, but it looks like she's a tough little trouper!