Ryan finished his finals today!  He is officially a third year now!  Yea!  Now he has a ten day break from school!  It will be so nice to have him home for the next little while.  Lincoln is already loving it! 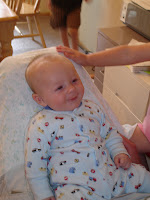 Ryan and Evie were getting Lincoln to smile it was so cute.  Lincoln has started to laugh a lot more and is pretty ticklish now.
To celebrate Ryan being done with finals we went on a little date out to lunch.  Our neighbor was so awesome and watched Evie for us so we only had Lincoln.  We went to a Chinese restaurant called Stir Crazy.  It was really yummy!  Then for dinner our neighbors came over and we ate. After the kids went down we played games.  It was lots of fun!  That was our day in a nutshell.  It was fun to celebrate Ryan being done with his second year!

Yesterday I didn't get to write a post but I have to write about our eventful day!  We went to play group at a park with some friends from church.  The park had a really cool tire swing there which Reuben loved!  Finally after being there awhile Reuben asked if I could come and push him on the tire swing.  So, I went and started to spin him and his friends.  They wanted to go faster so I did.  I guess I went a little to fast because Reuben finally asked if I would stop.  He ended up throwing up!  I felt so bad!  He ended up staying home from school just to let his stomach settle down.  So, I learned my lesson that Reuben gets dizzy pretty easy!
Posted by Ellsworth at 8:39 PM

Tire swings are always a little tricky! I got a little queasy just reading the story ;) Hope Reuben is feeling better! :)

Lincoln is getting so big. You should post new pics on flickr. I talked with Miriam the other day and she said Micah was 3 months already. How did time go by so fast? Tell Ryan congrats for finishing his 2nd year. Post more pictures!!

Scarlett gets car sick pretty easily. Maybe it runs in the family...

Poor Rueben! I thought that happened to Dylan once (got too dizzy) but then he really eneded up being sick. Way to go on another year! Lincoln is seriously so cute, right behind Corbin of course.

Yeah! Slowly but surely our guys are getting through school! We're still waiting to go on our celebratory date! I've decided that May is a super busy month with kids in school. We're swamped, but it's all good. I'd rather be crazy busy than not have anything on the calendar.

Hey there Ellsworths!! Love your blog!! We miss you guys!
~Jean & Tim (& Weston)

And HUGE CONGRATS on the newest little cutie!!! :-D