For Christmas we thought we would try something new. We wanted to take the kids to an activity that they would, hopefully, never forget. Kristen recently took the girls to "Toy Story 3 on Ice" and last weekend the boys and I got to go to a Monster Jam. I have never been to one so I was just as excited to see the trucks as Reuben and Lincoln. Reuben and I tried to guess who of the great trucks would be there. While it was a long shot I was hoping for one of my childhood favorites Big Foot, but my other favorite Grave Digger would be awesome. Reuben hoped for Grave Digger or Donkey Kong. To our great surprise our common favorite appeared. 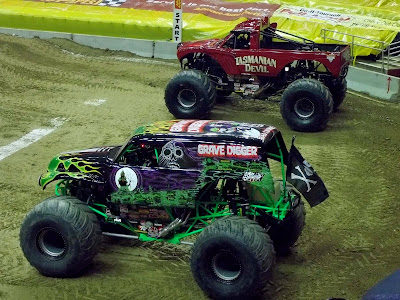 I hope I am not too much of a dork to say this, but it was TOTALLY AWESOME. The competition ultimately came down between Grave Digger and Tazmanian Devil, as pictured above. In the end Grave Digger dominated, with a tire that exploded at the end of his run. How exciting!! Reuben and Lincoln enjoyed the show, too.
The entire time Lincoln sat with his hands over his ears, though he also had ear plugs in. Everytime a truck came out he yelled "no". But when all was said and done he could not stop talking about the big trucks and the loud noise, in fact he frequently plays with his trucks saying, "vrooom, too loud". We all had a great time together and look forward to the next event we can do together. 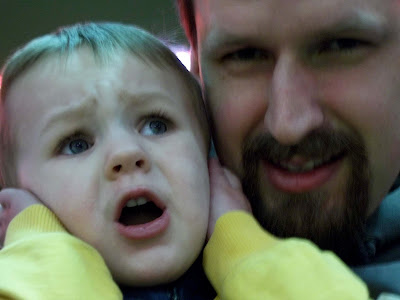 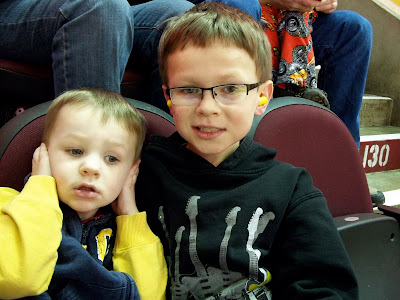 Posted by Ellsworth at 6:38 AM